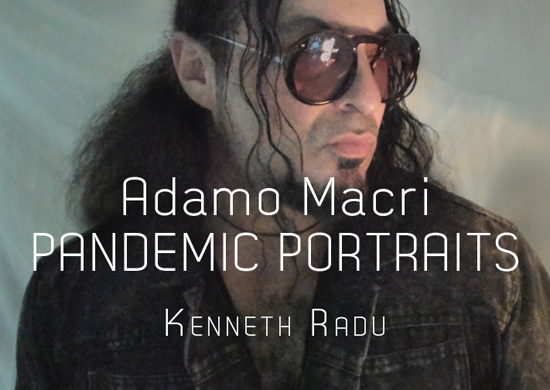 What is art to do? Covid-19 has emphasized major fault lines in our society: the tragic neglect of the elderly, corrosive racism and xenophobia, social inequalities, the self-righteous posturing of politicians, anti-science hysteria, conspiracy theories and the glorification of ignorance are enough to make anyone pull one’s hair like Courbet’s desperate man. If not despair, then perhaps wake up in the midst of the lockdown and ask: do I shave? Do I dress to go out? The questions are not trivial because they’re reflections of social malaise and personal depression during the pandemic. Individual dishevelment becomes a social symptom.

I pause in the midst of working in the gardens to ponder these questions, especially since they’ve been inspired, and in a sense, answered by Adamo Macri’s gripping portrait, 01.08.21.

Did men, who did not have to go to work or zoom daily, shave daily during the Covid-19 lockdown? Why shave, if we wore masks hiding scruffiness? Once the salons closed, we didn’t get our regular haircuts. If we couldn’t meet in clubs or crowds, galas or gatherings, many of us may well have neglected our personal appearance and wore the same clothes day in and day out. What motive to appear our best in public when to all intents and purposes the public had disappeared? Did we contain ourselves and stoically endure the abnormality of the months, or did we in one way or another, sometimes imperceptibly, break down, feel ourselves slipping into a void and neglected our combs?

A Macri portrait is a combination of theatrical performance and narrative poetry. The arrangement of costume and lighting, combined with the visual density, implications and metaphoric associations contribute to the telling of a story, the exposition of a mood and the ever-deepening involvement of viewers. The longer we participate in his portrait, the more we see. Everything is what it is at first glance, but the portrait is also more than meets the eye.

Now that the lockdown, if not over, has eased somewhat, I wonder if men have changed. And I don’t simply mean their clothes. I focus on men because the subject of Adamo Macri’s magnificent 01.08.21 seems to be maleness, or what we perceive as traditional attributes of the male, or the myth of masculinity. Not just the socially constructed image of maleness, but maleness in social crisis, male breaking down or keeping himself from falling over the edge. I promise not to use the too-often repeated and reductive term, toxic masculinity. There, that will be the one and only time.

This is not an issue restricted to one gender only, especially in a new age of gender fluidity and alternative ways of identifying oneself. And Macri often challenges notions of gender identity throughout his work, but here he seems to be, perhaps with tongue in cheek, focusing on a man as unambiguous male. Everyone, regardless of identity, has endured the lockdown. But I wish to focus on this particular Macri portrait with allusions to one or two others, wherein the notion of maleness, the essential myth of it all, has me cornered in a kind of metaphoric lockdown. I am fixed to a spot and transfixed by an art. I need to work my way out of it by working with the portrait to see what “man” is before me.

One obvious element connected with masculinity the world over is hair. I have written about Macri’s handling of hair elsewhere, and this portrait confirms my view of the hirsute pleasures to be seen in a Macri portrait. In 01.08.21, hair is so dramatically present that it becomes an inextricable element of the meaning of the portrait. It looks messy, but it has been carefully arranged since there’s nothing sloppy or arbitrary in a Macri portrait.

A great swath of black hair is tied behind the head; a black beard blends into the greenish-black jacket; dark hair is visible on the chest and strands of hair dangle over the rim of the glasses and down the cheek. Hair is visible in the left lens of the eyewear. A thin black ribbon or rope, as tight as a choker, encircles the neck. The hair almost acts as a drag on the spirits, a heaviness of soul. Although there’s no smile (which is often the case in a Macri portrait), or invitation to play, a magnetic allure seduces the viewer’s eye. The light on the face, the single bright button, and the light reflected in the right lens of the glasses are all crucial to the splendid effect of this Macri portrait. As a countervailing force to the powerful, masculine hairiness and oppressive green of the image, Macri bathes most the face in a subtle, lovely light, as if the man in the portrait has just stepped into the early morning sunrise.

Despite the possibility of sadness or melancholy, the heaviness of the colour scheme, the head is not bowed. The man is not weighed down by depression even though we live in depressing times. To demonstrate why this is important, consider Marc Chagall’s figure in the painting Job Désespéré, with its bowed head resting on a curved arm, depicted in black, dark green and purple.  Or even, more abstractly, Theo van Doesburg’s Wanhope (Despair), an image in which the human individual is merely suggested by the shape of a dark blot on the canvas that looks as if it’s screaming. Lee Krasner depicts pain and sorrow in her powerful work Charred Landscape, and does so without any reference to human figures, houses, animals, or any sign of external reality. It’s completely an interior work that pushes us towards and into the abysm of pain.

Looking at one Macri portrait, I am always confronted by the complex humanity of the image allowing me to see what I feel. Moreover, because the artist does not produce works in isolation, or separates a piece from the totality of his vision, one of his portraits invariably leads to another, and variations become a crucial aspect of his method and meaning. So, I believe with justification that 01.08.21 is a variation of 11.05.20, and they both find their origins in SPApr2020, even though, as the clever title suggests, the latter depicts a man emerging from or ready for a treatment in a spa, or stepping out onto a balcony on a balmy spring day. All three images, however, share many elements, and all three emerge from, and are possibly influenced by, the year of the pandemic.

I will focus primarily on one feature: the clothes. In the SPApr2020 portrait, the man is wearing a black robe, perhaps made from cotton, covered with white prints of bamboo canes in leaf. In Japanese culture, the bamboo symbolizes health and prosperity, not to mention well-grounded strength. Given the powerful and subtle use of black, one might wonder if Japanese prints influenced Macri’s aesthetic choices in this portrait. Although the face seems to lack expression and the eyes are partially hidden behind the dramatic glasses, the slight tilt of the head and the one visible eye indicate the man is looking up as if seeing something of interest in the distance. The mist of sandy gold behind the left shoulder influences the delicate lighting of the flesh tones, hirsute chest notwithstanding.

The jacket, if jacket it is, in 11.05.20 also has a quasi-botanical motif in its green and plant-like patterns, but it seems more like camouflage than celebration, a sinking of the spirits rather than an uplifting of the eyes unto the hills. The head is turned downwards, looking in the other direction, and the eyes are not seeking the light. The hair seems to be loosening and also falling forward. The face remains lighted and the face devoid of expression, but the overall mood of the piece is a quiet weariness. The green, a careful choice by the artist, is not vibrant but dull. This style of jacket is continued in 01.08.21, where it becomes darker and heavier, almost the colour of mud, devoid of any suggestion of vitality. In some portrayals of sadness or grief in painting and photography, clothes often contribute to the overall mood of a piece. The ponderous dress with its thick folds of the figure in Albrecht Dürer’s complex, symbolic Melencolia, for example, almost anchors the figure to the earth, too heavy to allow her to rise.

Yet, as I’ve said, despite weariness or sadness or various forms of confinement, Macri’s portraits collectively are progressions of mood, allowing for nuances and variations, avoiding simply dichotomies. If he seems to present an image of quiet despair, it is modified by the adroit manipulation of lighting and texture. Macri doesn’t go in the direction of Edvard Munch’s The Scream. However deepening the negative feelings in the first three pictures, there is always an equally strong undercurrent of resurgence.

Just a word about timing is important. Artists may create a series in chronological order, or mix or reverse the order, even work backwards, if that suits their purpose. Viewers need not be confined by the actual dates when artists create specific works, since they do so in their own time. Similarly, our feelings about and understanding of the relationship among works of art need not depend upon a calendar.

What portrait by Macri speaks more boldly of strength and resilience in the midst of disease or social unease than the forceful 14.02.21? I have said that Macri’s portraits combine theatrical performance and narrative poetry. Here, story meets narrative poem in a vigorous, audacious image. Audacious because of its reversal of the ordinary associations of black with grief and despair: black tuque, black glasses, black t-shirt, and a black mask that amply illustrates the French term couvre-visage. Vigorous because, freed from inertia and the black dog of depression, the figure is dramatic, vital, and ready to spring.

In Macri’s 14.02.21, the angle of the strong body suggests not a looking back to see if the enemy is catching up, as it were, but a turning to confront an opponent. Like a hip, contemporary warrior, far from Dürer’s seated and oppressed figure in Melencolia, the man is ready to engage. The conventional concepts of maleness, evident in the collective portraits, are amplified in the humorous white writing on the t-shirt, the most striking words being King and Rumbler. True, any gender can heroically lead the way, but I am speaking of Macri’s particular presentation of the male. The clothes fit snugly and contribute to the atmosphere of energy and urgency compounded by the vibrant black, in this instance, not the colour of grief, but the hue of victory.

In my mind, as I place this portrait next to the hirsute and somewhat melancholic images of the other portraits, I see a poetic story and gasp in quiet exaltation beneath the apple trees. This man, properly protected, vital and ever renewing in black, stands his ground. And so must the rest of us.

Kenneth Radu has published books of fiction, poetry and non-fiction, including The Cost of Living, shortlisted for the Governor General's Award. His collection of stories A Private Performance and his first novel Distant Relations both received the Quebec Writers' Federation Award for best English-language fiction. He is also the author of the novel Flesh and Blood (HarperCollins Canada), Sex in Russia: New & Selected Stories, Earthbound and Net Worth (DC Books Canada).